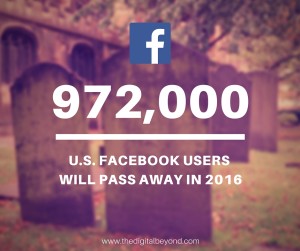 In 2010 my friends Nathan Lustig and Jesse Davis (founders of Entrustet, which was later acquired by SecureSafe) used data from Facebook and the Centers for Disease Control to estimate the number of Facebook users who would pass away in 2010. They updated these numbers in January 2011 and Nathan updated them again in June 2012.

A recent query by a major news organization prompted me to revisit these numbers and provide new ones for 2016.

I’ve followed Nathan’s process as closely as I could. One challenge is that Facebook’s Ad platform now provides rounded numbers for each age range.

Note: 2016 numbers use the latest CDC Multiple Cause-of-Death Data File, which was published in December 2014 and based on 2013 annual data. Facebook user data was obtained via Facebook Ad Manager.

The Best Way To Utilize Technology For Memorials
Loggacy: Enabling You to Record Your Legacy

The Uniform Laws Commission has released its final revision of the Fiduciary Access to Digital Assets Act, which was revised...