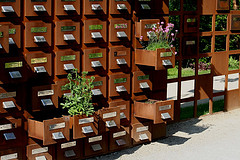 The British Library recently launched the UK Web Archive, a repository designed to archive UK Web sites for posterity. Their site states that it “contains sites that reflect the rich diversity of lives and interests throughout the UK.” The archive presently contains approximately 6,000 Web sites and users can nominate sites for inclusion. In the nomination form users are asked to submit a justification for inclusion with examples “a typical business blog, a prize winning site, representative of Internet culture or even humorous.”

It makes perfect sense that an archiving service, like the UK Web Archive, should limit its collection. With limited resources, they must consider the greater desire for patrons to view the content in the future. At our Core Conversation at SXSW 2009, one participant stated that you need not worry about the digital afterlife if you weren’t significant enough for the Library of Congress. While that’s true for larger archives, it’s not true for niche audiences. Consider that your descendants might want to view your content, even though it is not significant enough for a large archive. Also consider small social communities or communities of practice. Perhaps content is significant to one of these smaller groups, but not to the larger archive.

I’m excited to see more digital archives come about to archive niche content. And while the UK Web Archive is more niche than a general Web archive, I think there’s great potential for even more Web content to be preserved for posterity.

Photo: I couldn’t help but use this “archive of flowers” from Aureusbay on Flickr.

Imagine leading a quality digital life for 50 more years. What will happen when you die? What will become of...