Over then last several months our exploration of the digital afterlife has pulled me back to my roots as an information scientist. Information what? Information scientist—people who study information, people and technology. Kind of like a librarian of the digital age. This week I’ll present a talk at the Internet Archive during Personal Digital Archiving 2011 called “Personal Digital Archives and the Death Transition.” 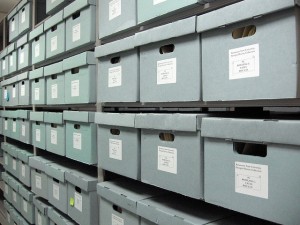 Personal digital archives are the shoe boxes, file folders and cabinets of the digital age. They’re more than a content repository. They’re a gestalt—a rich reflection of the curator’s identity.

The information architect in me wants to talk about how they should be organized and how we can better educate individuals in the care of their collections. But the bigger question, at least in my mind, is how can we design these archives for identity preservation?

Several studies on passing possessions on before death indicate that it’s done as an act of identity preservation. If you’ve ever been given a family memento, you have probably experienced this. I bet grandma said something like, “this is your grandfather’s watch that he wore for 30 years.” She may have gone on to say something like, “I remember that he looked at this watch constantly while we were in the waiting room when you were born.” Now this is more than a watch. It’s an object imbued with meaning. It has the ability to remind you of your grandparents and is thus an object of identity preservation.

That begs the question: how can we imbue digital objects with meaning? How can we design personal archives so that a lifetime of digital content can be accessible and meaningful to future generations?

I wish I had the answer. But in a later post I’ll provide my thoughts on the goals we should adopt for designing personal digital archives to meet this challenge.

2010 in review
SXSW Panel and Meetup

One Response to Personal Archives

In the meantime… ideas for mortals.

So while mad scientists are busy making digital salvation possible, what can us mere mortals do to enable our digital...