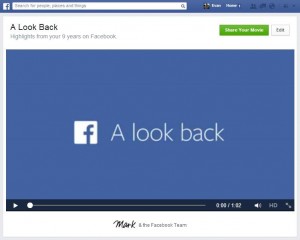 Along with Facebook’s announcement of new privacy policy for memorialized accounts, they also offered to create a Look Back Video, originally created to celebrate Facebook’s 10th anniversary, to any one who’s suffered a loss. In their announcement, Facebook representatives said the following.

Today, we’re also glad to begin offering a way for anyone who has suffered the loss of a loved one to see that person’s “Look Back” video. In recognition of our ten-year anniversary, a group of our engineers created personal movies for people using some of the posts and photos they had shared over the years. For one man in Missouri, the Look Back video he was most desperate to watch was one that had not yet been made. John Berlin reached out to ask if it was possible for Facebook to create a video for his son, Jesse, who passed away in 2012. We had not initially made the videos for memorialized accounts, but John’s request touched the hearts of everyone who heard it, including ours.

Since then, many others have asked us to share the Look Back videos of their loved ones, too, and we’re now glad to be able to fulfill those requests (video requests can be made here).

Our Take
Facebook’s original intent was to use the Look Back video to help users remember all of their moments on Facebook, however its appeal as a memorial seemed to take them by surprise. Our position is to support any service who makes an effort to use digital media to promote and remember an individual’s legacy, so we’re all for it.

Last week I received a reminder from Google about my Inactive Account Manager settings. The notice, reminded me of my...