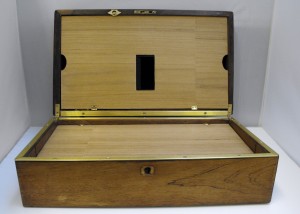 Photobox, a Bluetooth-enabled printer inside of a wooden chest.

New research from Carnegie Mellon University and Microsoft Research reveals that in a world of ubiquitous access to massive personal photo collections, we may enjoy them more if we give up control and exercise patience.

In a 14-month study using a device called Photobox, participants received four to five of their photos at random intervals every month. The device, which was designed to surprise and delight users, was designed by Microsoft Research. Photobox is essentially an wood chest, combined with a Bluetooth-enabled printer which is connected to a user’s Flickr account.

“Rather than allowing these large collections of images to stay hidden away, this device explores the use of serendipity as one approach to delighting people, while also making their images a regular part of their everyday life,” said Richard Banks, principal design manager at Microsoft Research Cambridge.

Indicative of the quantity problem these researchers set out to solve, is the volume of digital photographs we create every day. For instance, 1000Memories reported in 2011 that Facebook’s photo collection had 140 billion photos, making it 10,000 times larger than the collection held by the Library of Congress.

The study revealed “that people reflected more on past events and developed a renewed interest in their online photos” when using Photobox. Retaining the qualities of serendipity and surprise, as this research seeks to do, will ultimately help us design technology to retain the value of personal mementos, even in the face of massive quantity.

More Information:
Technology Heirlooms, a project from Microsoft Research
The Future of Looking Back, a book by Richard Banks

Two Minute Overview: How to Prepare Your Digital Afterlife

Here's an excellent overview of why digital estate planning is important, how digital media is affected and the what you...