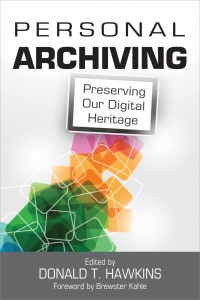 A few months back, I published a chapter in a new book called Personal Archiving: Preserving Our Digital Heritage, edited by Donald Hawkins. My chapter, Digital inheritance: tackling the legal and practical issues, addressed the current challenges around passing your digital assets to your heirs. Tom Wilson, editor of Information Research, had this to say about my chapter:

One chapter that ought to be of interest to most is Evan Carroll’s, Digital inheritance: tackling the legal and practical issues. Anyone holding any form of personal archive, which he or she believes may be of interest in the future needs to understand how to deal with digital assets in their will, so that after their death the resources are either put to the use the originator wishes, or bequeathed to someone who has undertaken to receive and preserve them. The legal issues are dealt with in terms of US Federal and State law, but the principles, I think, will be valid anywhere. At present, a key question must be, What happens to all my pictures on Flickr (or Facebook, or whatever) when I die? Most social networking sites and most photography sites do not have any procedures in place (to my knowledge) regarding the preservation of material when the subscriber is dead. Perhaps this book will raise greater interest in persuading such sites that they need to consider the question.

The entire book is an important collection of research and perspectives from some of the most respected digital archivists and researchers. If you’re interested at all in the future or personal archiving, I’d encourage you to read what these experts have to say. Below is a detailed outline of the chapters:

Chapter 1
Personal Digital Archives: What They Are, What They Could Be, and Why They Matter
Jeff Ubois, MacArthur Foundation

What happens to your Instagram account when you die?
Longaccess, a New Digital Safe Deposit Box with a Twist

... along with the promise of a digital after life. The concept of "digital death" and "digital afterlife" are just...