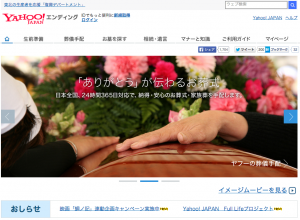 Yahoo Japan recently launched a new service, Yahoo Ending, which on the surface appears to be their own version of Google’s Inactive Account Manager. On second look, the Ending service is much more.

The basic service, free to all Yahoo Japan users, allows users to deactivate their Yahoo Japan accounts upon death. The service will also delete files from Yahoo Box accounts and cancel subscriptions using Yahoo Wallet. In accordance with Yahoo’s stance on accounts after death, there is not an option to share files with your family, as with Google’s solution.

Yahoo Ending is also a posthumous email system and online memorial. For a small fee, Yahoo will send a pre-written email to to 200 addresses. For the online memorial component, Yahoo Ending will open an online bulletin board for condolences.

In conjunction with Kamakura Shinsho, a funeral services company, it offers advice on how to write a will, plan a funeral and even find a grave. A basic package offered through Yahoo Japan costs about $4,500, including the funeral, embalming and cremation, plus a wake for 30 people. Feeding guests at the wake costs an extra $30 per person, and for an additional $1,500 you can get a monk to perform the funeral.

Unlike Google’s Inactive Account Manager, which is activated by a period of inactivity, Yahoo Ending is activated first by notification from a family member, but emails are not delivered until Yahoo receives a death certificate.

Yahoo Endings is certainly a step in the right direction, yet it’s missing one key component: choice. With respect to their Yahoo content, a user does not have the option to pass it on to their heirs, as deletion is the only option. This stops a step short of Google’s Inactive Account Manager, where users have more choice in what happens to their data. The funeral planning aspects are, on the other hand, quite interesting and could be a model for death care in the future.

One Response to Yahoo Ending: More Than A Digital Afterlife Service

Reaching Out for Support on Facebook vs Grief Forums

Reaching out for emotional support to whoever is willing to listen is a natural response when tragedy bares its ugly...