By Evan Carroll on January 23, 2018 in Uncategorized 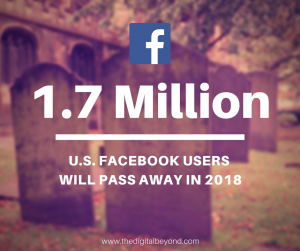 In 2010 my friends Nathan Lustig and Jesse Davis (founders of Entrustet, which was later acquired by SecureSafe) used data from Facebook and the Centers for Disease Control to estimate the number of Facebook users who would pass away in 2010. They updated these numbers in January 2011 and Nathan updated them again in June 2012. I picked up the task in January 2016 upon the request of a major news organization.

Another recent media query prompted me to revisit these numbers and provide new ones for 2018.

My first analysis is from January 2016, where I attempted to follow Nathan and Jesse’s process as closely as possible. Note: 2018 numbers use the latest CDC Multiple Cause-of-Death Data File, which was published in November 2017 and based on 2015 annual data. Facebook user data was obtained via Facebook Ad Manager. Note that Facebook numbers reflect potential advertising reach for and do not reflect the total population of users. The author believes that the potential reach numbers are lower than the actual population, which means these death estimates are conservative numbers.

Digital Legacy Design Project
Do You Have Digital Liabilities?

We interviewed Jeremy Toeman, founder and CEO of Legacy Locker at Digital Death Day 2010. This is the first of...