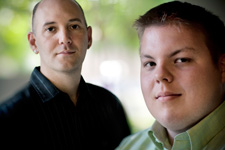 The Digital Beyond is a blog about your digital existence and what happens to it after your death. We’re the go-to source for archival, cultural, legal and technical insights to help you predict and plan for the future of your online content.

The Digital Beyond was started by Evan Carroll and John Romano, thought-provokers in the field of digital legacy. Their research, first presented in a crowded room at SXSW 2009, was immediately mentioned on NPR’s All Tech Considered. After realizing the growing importance of the digital afterlife, they created The Digital Beyond as a way to help everyday people understand more about their digital afterlives.

The Digital Beyond—thedigitalbeyond.com—has grown into the go-to source for digital afterlife information. The New York Times, NPR’s Fresh Air, Obit magazine, NPR’s Here and Now, Fox News, CNN and The Atlantic have featured John and Evan and their work with The Digital Beyond and Your Digital Afterlife. They returned to SXSW in 2010 to host another session called “Become Immortal: Understanding the Digital Afterlife” and again in 2011 to lead the panel, “You’re Dead, Your Data Isn’t: What Happens Now?”

Today Evan maintains The Digital Beyond and is available for media and speaking requests. Our frequently asked questions might also be helpful to you.